I mentioned in my last post, Here, that the craft group that I, along with a friend teach each week, had been making a bag and quilt for a little girl aged 4 who had open heart surgery.
The quilt my friend and I put together is now completed and will be popped into the bag this week and given to the little girl.
Here's how the quilt turned out: 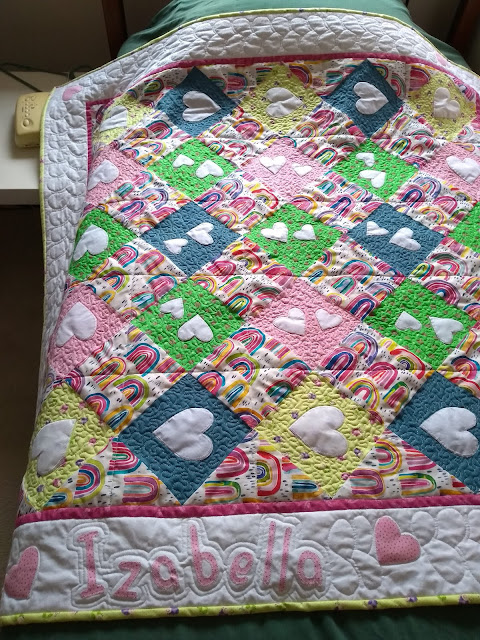 We had fun piecing the coloured blocks to co-ordinate with the rainbow blocks. And also the 'fun' of doing the calculations to cut the set in triangles! Phew, lucky my friend has taught maths. Anyway, I left the quilt with my friend all pinned in rows ready to be joined up. After completing the appliqued hearts, she very promptly (within a couple of days) passed it back to me. It was then up to me to find a backing - a sheet I had picked up that is proving to be very useful and versatile because of its large circles. 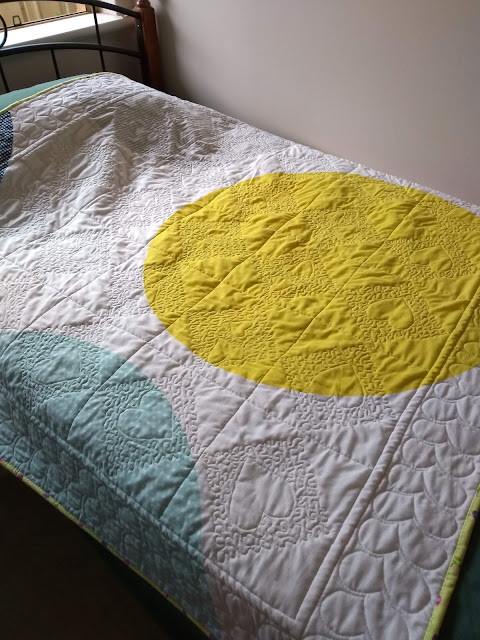 And here's just a close up of the stippling around the hearts and the spineless feathers. 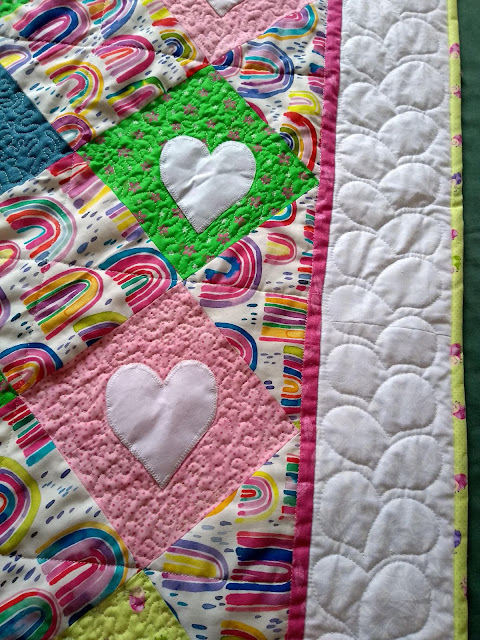 When I mentioned to my friend that I would likely quilt spineless feathers in the white border she said: "Oh, couldn't you do hearts?" I answered truthfully, "Well, spineless feathers are much easier and I think they look rather like hearts anyway". She hasn't seen it other than a photo yet but she seems fine with it (thank goodness).  Looking forward to seeing how the recipient and her Mum like what our lovely group has put together.

Then I went on to complete a quilt begun a couple of months ago in anticipation of a friend's grandchild to be born in April. As things often do, it didn't work quite to plan in that I hadn't quite completed the quilt and the grandson made his appearance a little early!
I had fun with this one which was one that Sarah made Here, that she called 'Place Your Bet'. I adapted to make the size a little smaller (50" by 43") and was very pleased to have all the fabric on hand in my stash.
Its a simple quilt that comes together quite quickly: 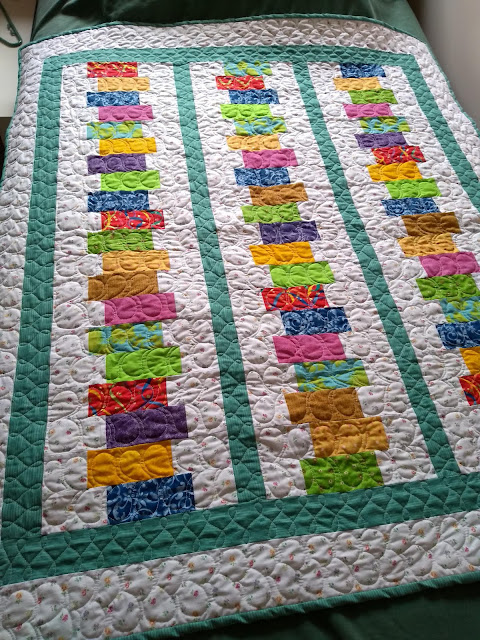 Again you can see the spineless feathers in the border, but also in the body of the quilt this time too. I think I may have to find another 'go to' pattern for variety's sake, but this one is really so easy. I don't know how you learn new patterns, but I spend some time doodling on paper first of all before giving the pattern a go on some real fabric. Then I progress to a quilt. Mine is all done on a domestic machine, my Janome that I'm very happy with.

The pattern on the green I think of as loop de loops but they also remind me of the start of a musical clef. The backing was also another sheet I had been given, this time very suitable for a new born, with cute teddy bears and balloons. 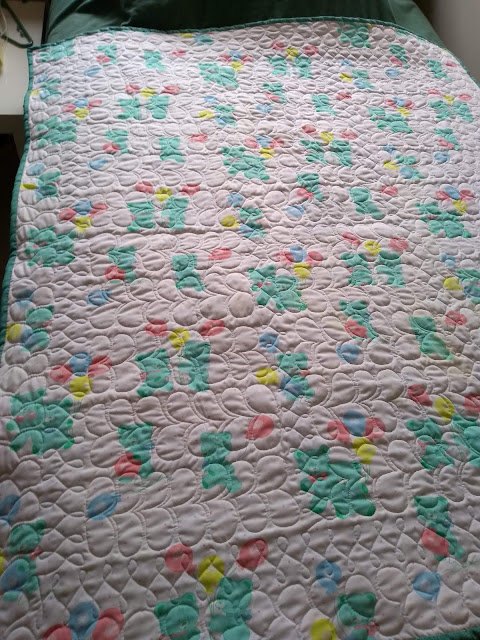 So this one feels like a win on many fronts - using up some scraps, a U.F.O. now completed, a gift for a friend's new grandchild and I'm feeling freer to move on to a new project, unless I really should sandwich and quilt up the 3 tops I know are lurking in my sewing room.....Oh and the table runner I need to complete to give to a couple getting married next weekend. Oh well, its all sewing that's what counts.