I know it's not quilted yet, that fun is still to come, but for now I'm celebrating a flimsy finish. 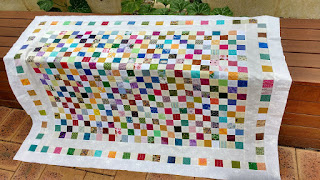 This was a leader/ender project that seemed to grow quite quickly as I was doing other things. Then of course I wanted to complete the floating border, so it became the focus. Its amazing what scraps can do!
In the interests of full disclosure, here is the back complete with all the seams and I've pressed most of them open - makes for a flatter surface when I come to quilt it which I hope will be soon. I think it's about number 5 of my to do list. Already 5 on the list to do and its still only January! I think I'd best make sure I do those before I add any more. 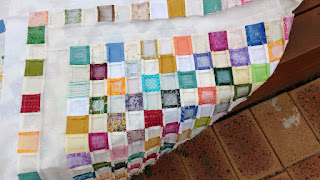 This will be another baby quilt, I think that makes the third I have in the wings just waiting for the births to happen. Its good to be prepared. I like the size of these projects and feel a sense of satisfaction when I complete them. Plus they make a great gift.

Linking up with Confessions of a Fabric Addict.
Until next time,
Lynn
Posted by Lynn at 9:06:00 am 8 comments:

I'm celebrating a finish, and one from last year's list, leaving only one to complete from 2015 (other than a couple I didn't quite get to add to that list, now they can just be part of 2016's ever growing number). 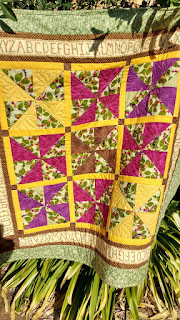 I'm calling it bugs as the non plain fabric has cute centipede type insects on it. 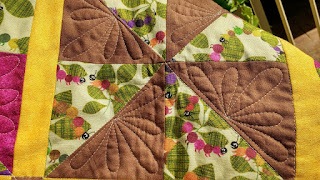 I had fun doing just a simple free-motion quilt flower on the plain fabrics - it's a baby quilt to be given away soon, so fancy stuff not really needed and I'm sure it will get lots of machine washing, so staying together is probably more important.
I love it when a plan comes together and this quilt makes me smile as I look at fabrics I've had for a couple of years or more, but they just came in to suit this quilt. The 'alphabet' edging: 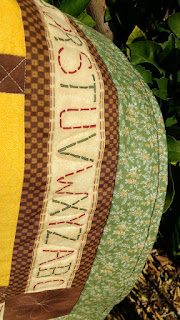 is a border from a piece that I'm sure to use elsewhere and rather than just keeping it and using it as a whole I realised it fitted just right here. The border and binding also part of the stash for over a year. So, here's to a finish and on to the next one.

linking up with Quilt Story and One Monthly Goal (Red Letter Quilts)
Until next time,
Lynn
Posted by Lynn at 4:59:00 pm 2 comments:

Feeling quite pleased with myself as its only January 12 and I have my first finish for the year. I feel even better knowing that I didn't even start it until 2016 either. (I just won't think about the couple or so from last year that I haven't yet completed, but they will have their turn).

I'm agreeing that a good name is 'Pink Lemonade' (thanks Bonnie), a simple half square triangle baby  quilt. 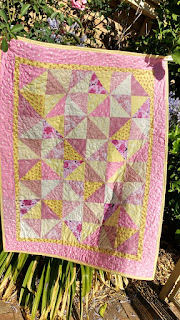 Seems like whenever I go outside to take a photo of a project the wind comes up. It could have something to do with the time of day I complete things and try to capture them. Perhaps I should try in the mornings but when I've just completed something I want to take a photo right there and then.

I also wanted to make sure I had it quilted today so that I can pass it on to my friend tomorrow. And again, wouldn't you know it, my machine just didn't want to co-operate. I figured it was probably due for its annual service anyway and having done all I could do (new needle, oil, cleaned everything I could get to etc) I just surrendered and took it in to be serviced. I sure hope it comes back on better behaviour.
So I attached a darning foot to my old faithful basic Janome, dropped the feed dogs and gave it a go, doing a simple loop all over. I don't have a long arm, or access to pantographs, just me and my guiding hands.  Thankfully its a small quilt (34" by 42") and it worked Ok.
You can see a close up here which also shows that I machine quilted the binding using a little zig zag stitch for a bit of variety: 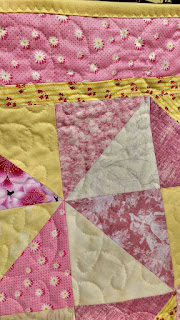 As I was trying to use up some fabric that I had already used for at least one quilt, I didn't really want to go out and buy more pink or something that would work for the backing. So I decided to just piece what I had left over. I think that worked Ok. 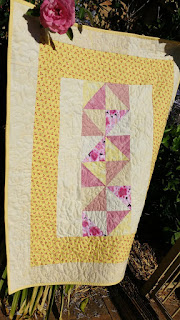 I'm going with the thought that certainly the baby won't care, or be aware what she is lying on and I think her first time Mum will just be pleased with the gift. And I'm pleased to be completing project one for the year - win all round!

Until next time,
Lynn
Linking up with One Monthly Goal. 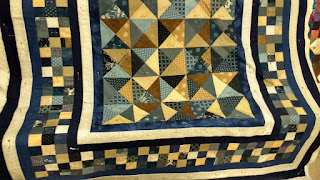 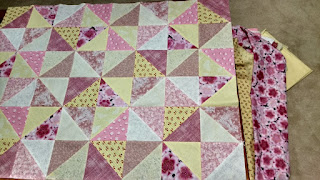