A friend of mine is having a 50th birthday this coming weekend. Unfortunately I can't make the celebration as I'll be around 500kms away, but I thought I could make her a small gift. So I worked out this table runner.

The strips were pretty easy, if just a little time consuming, but worth it. They varied in width from 1 and half to 2 and half inches. The lengths I also varied, the total width of the runner 14". Then since the wavy free-motion quilting seemed to work quite well on this table runner I'd made before 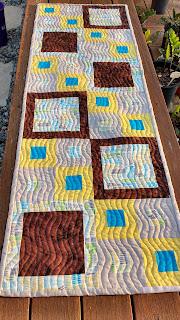 I thought I'd give it a go on this one too. Pretty happy with the result. And fortunately I had just enough of the olive green to make the binding. I'll be finishing up that hand sewing around the binding tonight so that I can pass it on tomorrow.
Here's a shot of the backing which is featured on the front as well.

I think my friend will like it. What's your 'go to' gift for a friend at short notice?

I've been making a baby quilt in anticipation of a couple of babies I know are due either soon or in a few months - no harm in being ready. I've made this pattern before, back in March, called Baby blue. And I quilted it quite simply cross hatching the squares and doing a swirl in the white sashing.

But when I saw what Louise did with her similar Butterfly garden I knew I wanted to try that. So here is my version: 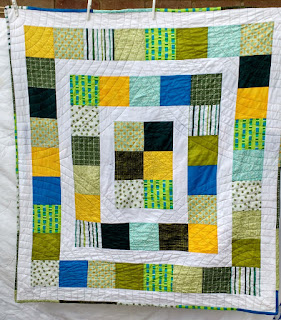 Mine doesn't have that lovely double type sashing that Louise's has, but these were the squares I had, so I went with it. While the quilting is pretty straightforward, the fact that it goes around in a curve means that on my domestic machine I still need to support the remainder of the quilt on my left as I go, which took just a little more organising (chair on the side etc).

The quilting shows up a little better on the back: 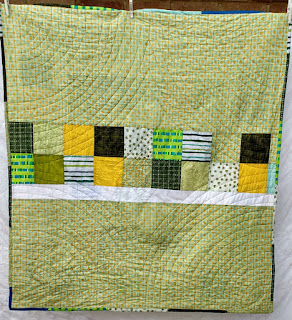 And here's a closer up of those squares: 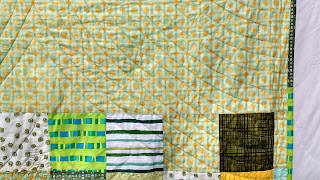 I needed to include those and the piece of white sashing like the front as I didn't quite have sufficient fabric for the backing but I'm pleased I got to use up that pretty pae green and yellow/orange dots. The colours are a little more accurate on the closer up shot but I'm going to have to get working on taking better camera shots.
This is a reasonably quick baby quilt and I like the idea of the various ways of quilting. Might even try another and just do a basic stipple.

Well back to the next project - I'm having fun creating a library shelf quilt, but will show photos of that a little later. As usual there are also projects to complete! 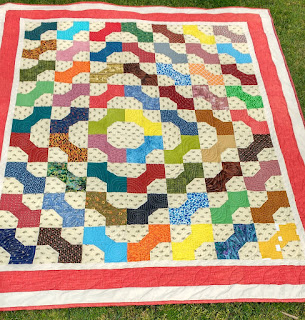 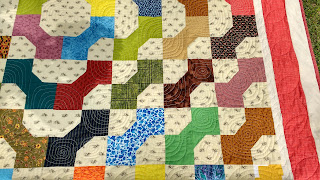 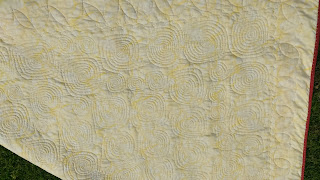