I realised its been a while since I recorded a blog and I hadn't posted my last three finishes. While technically I am working on my list of six unfinished projects, two of these recently finished items weren't actually on the list.
The first was made for a friend who just had her third grandson born overseas. She had a piece of fabric that she thought just suited an Australian reminder - Blinky Bill, a cute koala. As I couldn't quite bring myself to cut into it, it became the backing to a simple primary colours quilt - making it reversible really.
Here's the 'back': 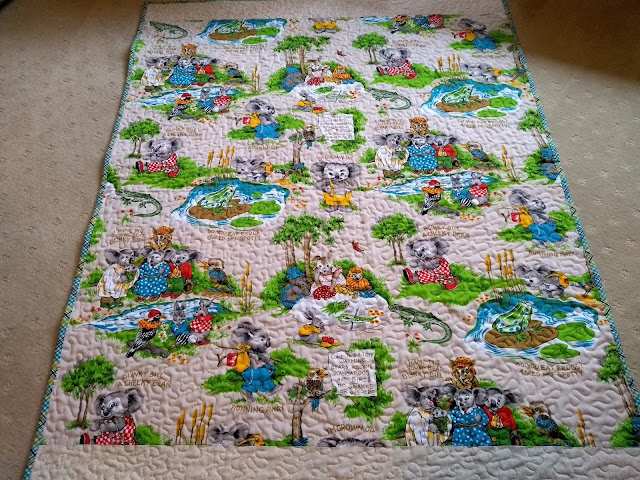 And then here's the 'front', depending which way they want to use it. 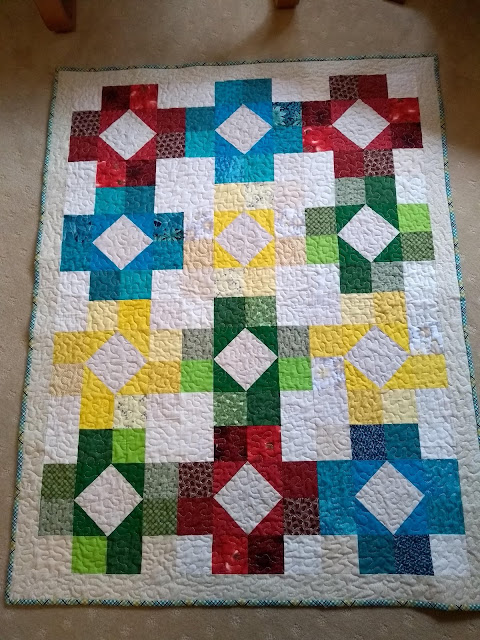 I was very pleased to find the fabric for these blocks in my stash, as well as the binding, which goes well with both sides, a blue and yellow cross hatch. The simple stipple worked well for both sides too so my friend is happy and next month will take the quilt with her when she travels to meet her new grandson.

My second finish was a bit of a 'squirrel', or is that Magpie? I can't seem to get rid of any small scraps of fabric and small squares in particular hold their own appeal. This is the third postage stamp I've made, in variously two or two and half inch squares. I like the alternating pale pairing to let the other fabrics shine. 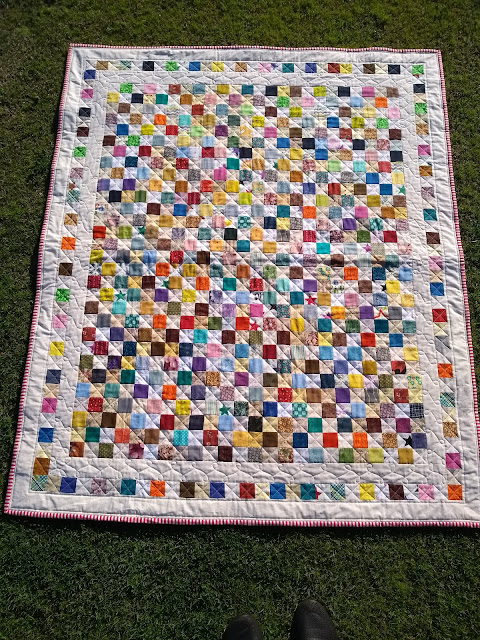 I must have had this folded badly as you can see that crease across the centre. I know that the best place to 'store' a quilt is on a bed, but we only have so many beds in our place before the quilts find a home. This one is likely destined for one of the babies born to our MOPS (Mothers of Pre-Schoolers) group that I've made several quilts for. 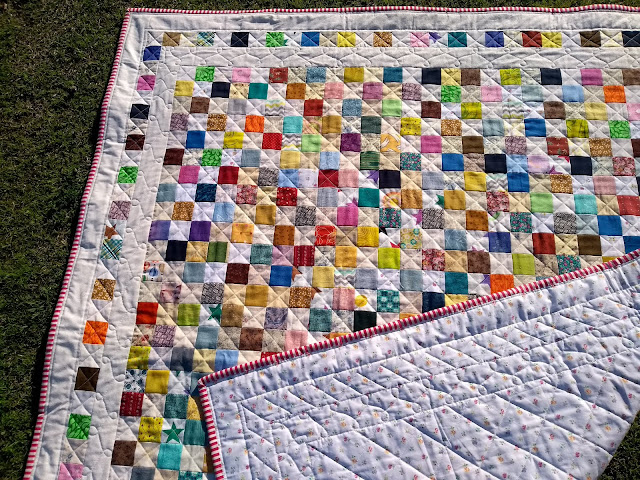 The backing is a sweet white with small coloured flowers. I went for a simple cross hatch with this one and then the swirls in the white areas- it always reminds me of a musical treble clef for some reason. That pink and white candy striped binding is becoming a bit of a favourite for me. One final close up of some of the cute fabrics - they make me smile recalling other quilts made along the way. 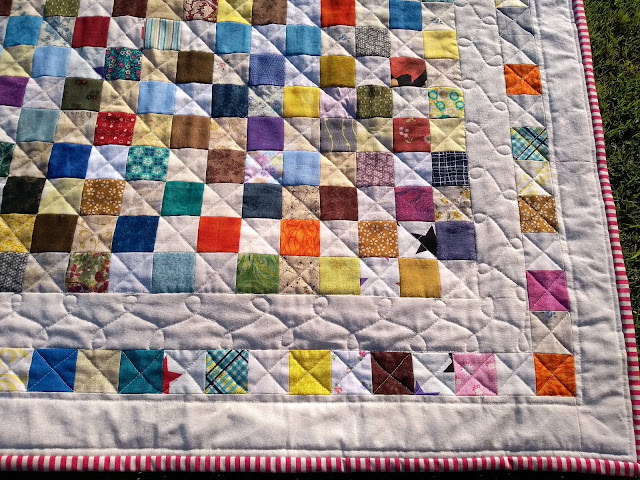 So that brings me to number three. I can't recall just when I started this or really why it stalled along the way, but it was number one in my list of six. I had done quite a bit of the quilting last year or the year before and realised it was just a matter of a few hours and I'd be done. Anyway, finally here it is: 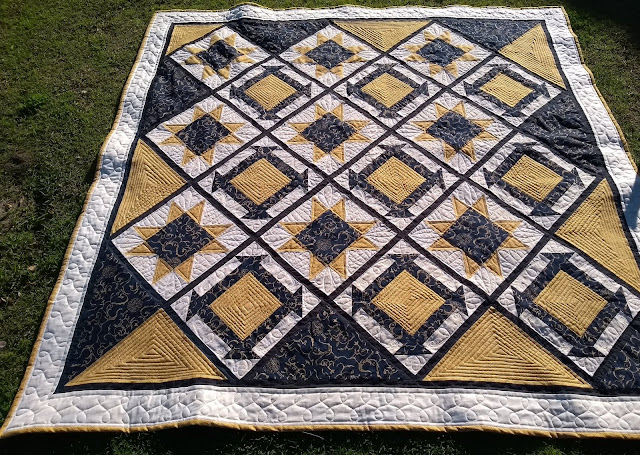 I recall making the star block so that I could figure out some dimensions for a friend in our craft class who wanted to make a quilt with a reasonably large block. I'm sure she gave her quilt away a couple of years ago, and while this flimsy came together quite quickly, I mulled over the quilting for a while. I free motioned in the cream areas and then finally decided to just shadow or outline the beige coloured squares and triangles. I think that's when I stalled. Going round in a square (if that's not a contradiction) was not the most interesting thing to do!! Sometimes you just need to get on and do it. So over about a week in short bursts I finally got there. A close up of some of the quilting, not flashy show level, but eyeballing and going for it can be fun. 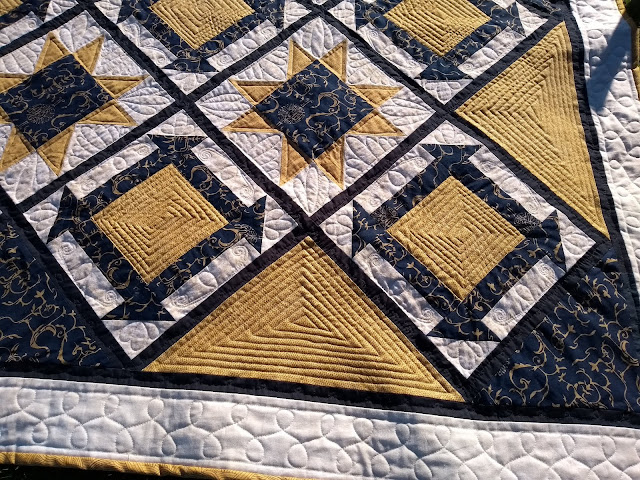 The backing I was really pleased to find, a navy with some little splashes of sparkle. It seems to fit quite well. This photo may make it look like its not sitting flat, but it is truly. 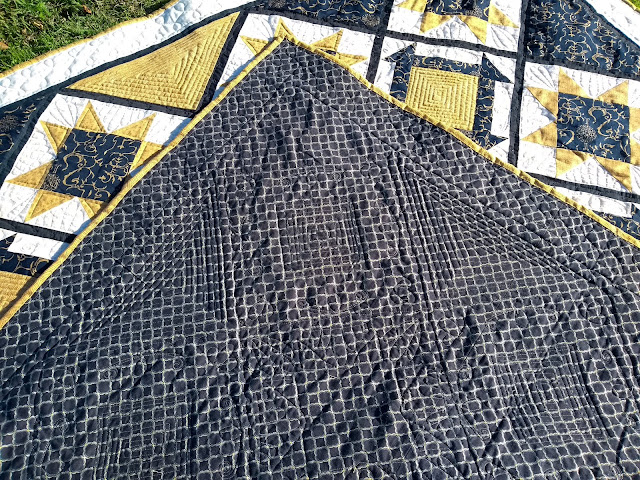 So number one on my list, that leaves five! One is so very nearly finished just some more quilting to do (where have I heard that before?). So we'll see what progress I make this week. As long as I don't get distracted with anything new - my very supportive other half is very good at keeping me on track ('Have you finished that other one yet? You can't anything else until that one's done really can you?'). Hmm.