In between attempting to make six baby/cot size quilts that I wrote about here I'm taking an occasional break and making some placemats.

Last year I quilted a wall hanging for a friend who had created the blocks on her embroidery machine using a programme that had some local landmarks in it.

This is the wall hanging as I was quilting it: 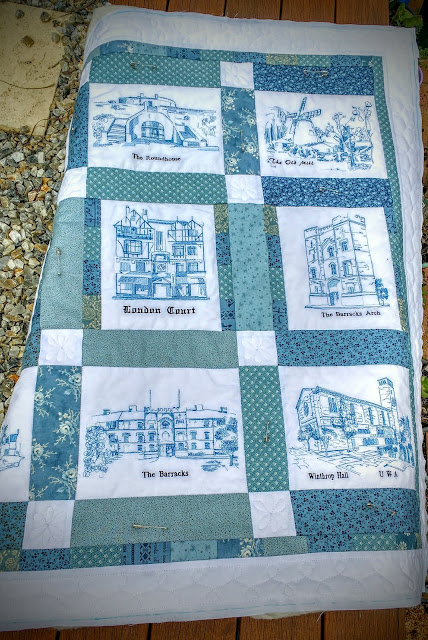 My generous friend, as a way of thanking me, made me some of the same blocks but in totally different colours. I thought they'd come out quite well with some framing and some quilting around them. Since I have 8 of these, you may see some more shortly, but here are the first two: 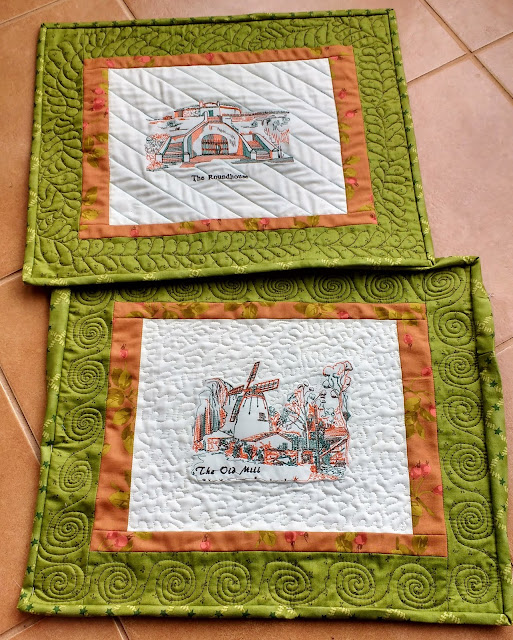 Its almost difficult to recognize these as the top two blocks in the wall hanging, but they are. The binding is clearly not finished on the second one, but I'm happy with how they're coming along. As they will be a gift once they're all made I hope the recipients get to visit some of these places too.
They finish up at a generous 18" by 15" but I like to have a larger size rather than something that will only just fit beneath a plate. That way even if you only use a couple, they work quite well.

The challenge is always juggling the borders so that despite the orientation of the blocks horizontally or vertically (dictated by the shape of the embroidered buildings) you end up with the same sized placemat. But I'm sure all that figuring out is good for the brain.

The fun thing about smaller projects like this is that sitting hand sewing the binding is quite a soothing thing to do at the end of the day and it gives a great sense of achievement - even if it's only one placemat.

So on to the remaining ones and back to those baby quilts. Definitely keeping me busy!