The blogging world can be such an inspiration. Last week I saw a post (apologies, I can't recall just where now) where panels were shown in a new light. I was inspired to pull out an old one I picked up really cheaply in a remnants bin a couple or more years ago.
I forgot to take photos before of course, but here are the banner, bottom and couple of squares before I began working with them: 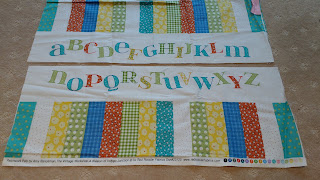 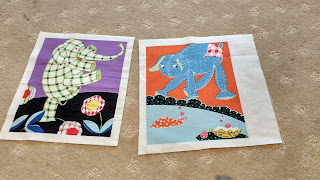 The animals looked like fun, I was just never quite sure what to do with them. But thanks to the person who demonstrated what she had done with a panel, as well as Nann (thanks Nann) with her bordering of some blocks, I had enough inspiration to begin working with them to frame them and then make up the rest as I go along. 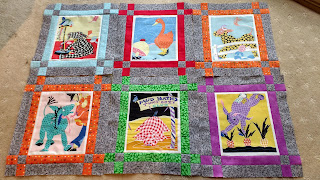 They're quite cute but adding something a little more than just sashing just helps them to stand out a bit better I think. And the grey is also a bit of a variety on white or cream, so I'm hoping that when I figure out what else to do to put it together (geese, or some other borders/sashings??) it will work well for a friend who's expecting a baby in a few months.

There's also some satisfaction in seeing the blocks come together pretty quickly. Variety is the spice of life after all.