Have you heard the story of 'The Rainbow Fish'(c) ? It's a children's book by Marcus Pfister and was originally published in 1992 in German. I didn't know the last 2 facts about it but it seemed only fair to check out who wrote it since I was making a quilt featuring the fish itself.

If you ever want to show children the merits of sharing, this is a great book. It has as its hero or heroine, a beautiful fish which has sparkly scales over its body like this: 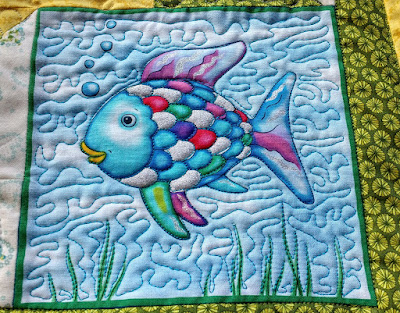 The story begins with the fish feeling very proud of its shiny scales (I'm paraphrasing here) but when others admire it, the fish rather jealously guards its scales. The Rainbow Fish, however, begins to realise that its one thing to have admirers, another to have friends. And it begins to give away some of its shiny scales to other fish around it, like this: 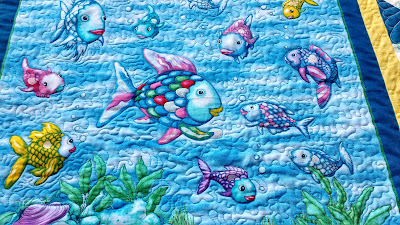 If you look closely, the fish in the centre is offering (in its fin) a shiny scale to another fish.

Where am I going with this fish tale you ask? I have a gorgeous niece who is turning two at the end of this month. Here she is enjoying an ice-cream (almost as big as her!). 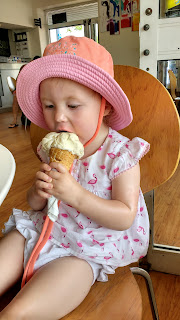 I don't know about you, but in my experience, nearly two year olds sometimes have difficulty in spontaneously sharing with others. So for her birthday, she is receiving from me, a copy of the book and a quilt showing the same story. I was fortunate to spot a panel at our major quilt show back in May this year and so I put it aside to work on at the last minute - no one else does that I'm sure. 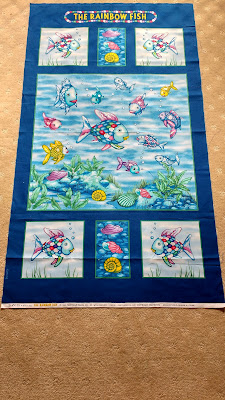 I also wanted to make another quilt with half square triangles - such a versatile pattern I find. But when I looked again at the panel, I realised that the colours I had chosen for the half square triangles seem to complement pretty well. Hurrah, I had my borders beginning to formulate. Of course things don't always go as easily as one might hope, so many calculations, fiddlings and such later, I had the shapes coming together with four extra fish at the corners. 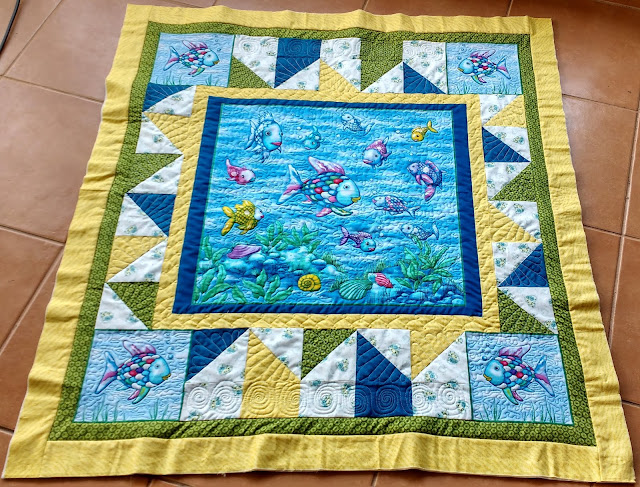 I have had such fun quilting this - from the stipple in the 'sea', to the swirls on the extra pieces needed to be added to the half square triangles so that the corner fish would fit nicely (sometimes I can see the benefit of a kit all put together and carefully measured by someone else). I even checked into my stash and found a fabric that seemed to have a scaley kind of pattern to it which I thought could work quite well for the backing: 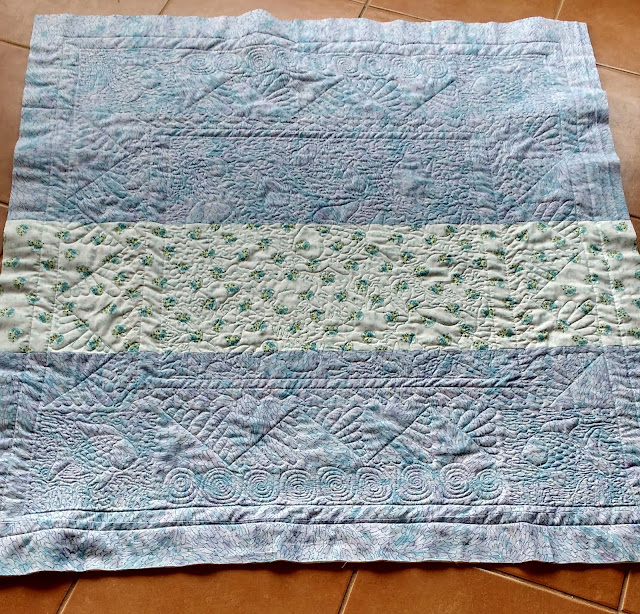 But, as is often the way, I didn't quite have enough, so I used some of the white floral that I'd used on the front as a central piece. I don't think 2 year olds are too fussy about that kind of thing.

So there you have it, the story of the Rainbow fish made into a quilt for a precious little girl. If you have any littlies in your life I hope you check the story out, it's a beautiful story and book. And of course there are others in the same vein.
Now, to just put that binding on and sit to hand sew it tonight - lucky its only a small one, not bed sized. I imagine it may get dragged about, shared with dollies and the like, but that's what quilts are for, to be used and enjoyed.

Size: 40" by 43"
Wadding: 60% cotton; 40% polyester [great for the washing machine].
Thread: Embroidery thread for the top; Superior for the bobbin.