It's so good when something works out - especially when you're stuck and can't see a way forward.
I began this scrap jar stars quilt with the light grey background fabric in mind. I thought I had enough, so made up half a dozen stars. Then I realised I might not even have enough for nine stars (was heading for a dozen) when I realised that I didn't have enough fabric at all.

Enter wonderful friends - and their suggestions and fabric. The first friend who'd given me the fabric in a swap, sourced what scraps she could and that stretched it to the nine stars. 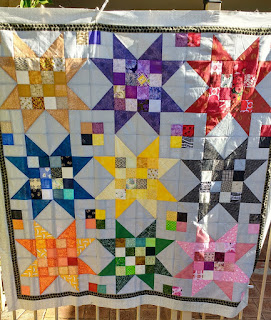 Then I auditioned various fabrics to figure what kind of border it needed - I thought it needed one not just binding. Again, friends to the rescue with opinions, trying their fabrics etc. We found one that was an olive green background but had strips of black, white and lime green. Yuk, not a great looking fabric, but those strips of black - they worked really well as a border.
So I added those, then tried again with the light grey fabric I had that was similar but not the same as the background I'd been using. Now, hurrah, it worked well because it had the border to break up the way the eye sees it. 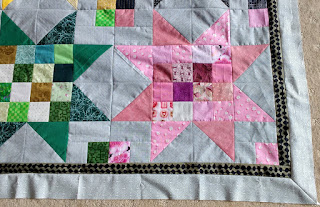 So now on to quilt it (once I find something for the backing - the never ending quest to use up my stash!).
Looking forward to doing some ribbon candy around the squares that are formed where the blocks meet with their four colours. We'll see what else I think of as I go.