I really enjoy making scrap quilts. There's something about using the small pieces left over from a quilt to create something more, something bright, colourful and creative that just makes me smile. So as I completed the binding on this last quilt I had a wonderful sense of satisfaction. 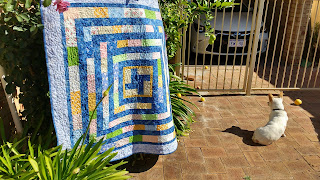 It also brought me great pleasure to know that my list of works in progress is now down to five - and that means I can add others (eventually!). Technically I didn't finish it in October, since today is November first, but it mostly feels like it was done in October which means that I've done six of my WIPs in six months, plus a couple of extra quilts which I'm pretty happy about.
As you can see from the photo, my 'helper' was in on the action, but only as long as she could look through the gate and make sure we didn't have any unexpected visitors coming along - she's nosy that way!

The scraps for the quilt were from a bit of a 30s collection from a quilt I made back in March (eventually given to a couple with their new born son) and so I continued the blue as a contrast that seemed to work well. As I see it completed now with the thinner blue on the final border, I kind of wished I had made the inner ones a little narrower, but anyway now it's done.

I had fun quilting a simple loop and then daisy pattern that I'd seen somewhere on Pintrest - though that one was done in a square whereas mine I did more as an all over - though it's free-motion quilted on my Janome PC Q1600. I also learned the valuable lesson of oil - how essential it is to smooth sewing. You'd think I'd know that by now, but I guess when you're quilting and preoccupied it doesn't cross your (or my) mind until you suddenly realise it doesn't sound quite like its purring any more. 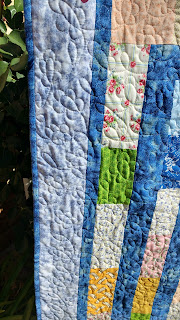 The backing was again from my stash (hurrah!) with a cream border attached to each side of some blue and cream paisley type fabric. Seems to work well. 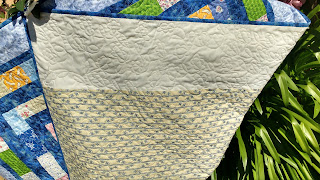 So now, I continue to work with my five, yes 5 quilts on the go. I just won't mention anything else that may be lurking somewhere just waiting its turn as well - there just could be some that haven't even made it onto the list yet!
Until next time,
Lynn
I'm linking up with Confessions of a Fabric Addict and Slow Stitching Sunday (Kathysquilts.blogspot.com.au)