What colour is Indigo?

My husband is a great encourager of my patchwork and quilting. He doesn't comment or complain when I seem to have bits of fabric in almost every room of the house, leave my sewing machine on the kitchen table, take up the floor space while adding borders etc. And he even offers me challenges from time to time. His latest one was to ask: 'What colour is Indigo?' prompting me to order some charm packs of Moda's Indigo and to add a couple of others. The challenge was then to find the pattern that would best show the fabric off. I found this one that he liked (it's geometric, one of his favourite things). 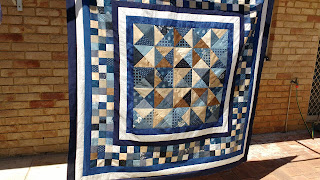 Its rather windy here this morning so I was pleased to grab this one quickly before the next gust came along. Its only a flimsy at this stage, but as its also one of the four on my WIPs before the end of 2015 list I'm pretty pleased.
A much earlier challenge (2010 - thank goodness for labels and photos) is this one that he saw in a magazine (yes, he even browses through those too). 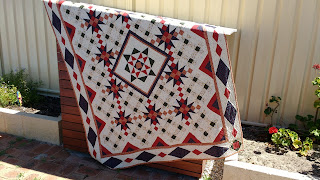 But I digress. When I first saw the Indigo pattern I thought, hmm, that looks pretty straight forward. I like half square triangles and a few borders. But I didn't think to count how many borders and how many mitred corners that might be (pardon the pun). 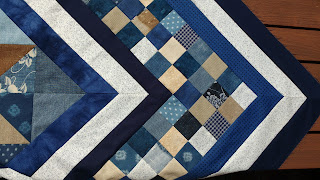 Here are just some of my mitres and I'm so pleased with how they all line up since there are 24 of them altogether, yes 24! So if you think of putting 6 borders on something just remember that. The other quirky thing I realised when making this quilt is that there is just one fabric that has a 'thread' on it. Not the thread that makes up the fabric, but a strand that wanders across: 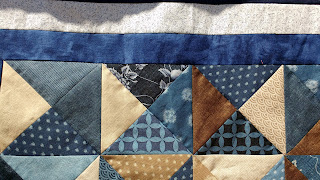 You can see it in that top navy type triangle with the flowers and also in the lighter blue one in the previous shot. I can't tell you how many times I tried to pick that thread off the quilt top!
Anyway now it is all pieced and together so the next challenge is to get the backing organised and sandwich yet another on my list - yay! This is number four on the list but I'm also continuing to piece numbers 2 and 3. One was an earlier post this week on my 'diminishing list'!

Until next time,
Lynn
Linking up with Needle and Thread Thursday and Confessions of a Fabric Addict
Posted by Lynn at 10:27:00 am