Its the time of year when we think about gift giving. Or if we're a bit organized we do! Our small craft group has been meeting in a community room that is part of a child-care and College and we've been fortunate that the manager asked her cook to leave some type of food out for our afternoon tea - how gracious. So she has made us savoury scones, chocolate slices, and all manner of yummies. As we approach our final day at the centre one of the other teachers asked if I could make her something to say thank you. I quickly and rashly said 'sure'. Then racked my brains to think, did I have time to make a small lap quilt - not really. What about a bag? Hmm, takes me at least 2 days to do that.

I had asked the cook what her favourite colour was and she'd said pink. So I checked to see what I had on hand and found a panel. Of course I forgot to take a photo of the panel before I began, but here's how it turned out after I'd done some framing, quilting and fiddling with some pieces that had been chewed by a huge mouse (that's how they looked before I began). 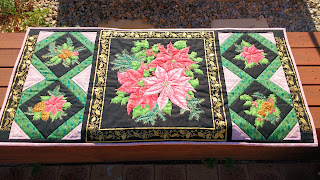 The panel had been that centre Poinsettia and the four other squares were one whole piece. Here are the edges such as they were: 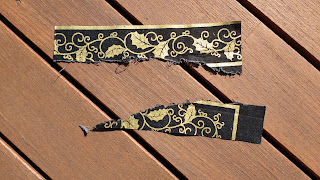 See what I mean by a big mouse! I guess that's why the piece was in a remnant bin when I bought it! I auditioned various shades of pink to red to see which would help to feature the pale pink flower that I rather liked and this one won out. 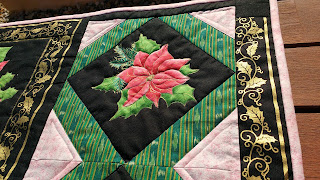 The green stripe was also something I'd had around for a while - but when you want the right piece its such a good feeling to find it in your stash! I did a simple quilt around the flowers and the pink triangles, leaving the rest as its busy enough in its own right. Here's a shot of the backing which also seems to fit right in to me. 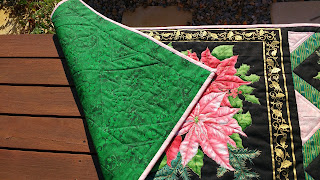 And a final one of the centre just because it looks good in the morning sunshine! 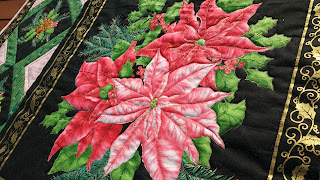 I do like it when a gift comes together. We'll give this to her this Friday so I hope she likes it.
Until next time,
Lynn