I've heard it said that people are either dog people or cat people. I guess if that's so, then I'm a dog person. My sister-in-law, however, does not fit the saying - she has 2 dogs and 3 cats. So when I saw some Michael Miller fabric with cats on it, I thought of her, with her birthday this month. 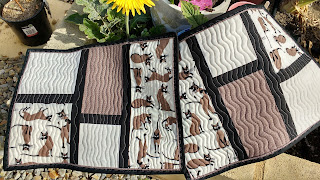 These were fun to make. I had the other fabrics in my stash and the organic (sounds so much better than free-range or wandering which is what I think of) quilting works well for placemats. I began by thinking I might go around the cats - as cats prefer people to do! But in the end the lines won over.
While the fabric calls these Siamese cats, I think my sister-in-law's may be Burmese. When I look after my niece (a very cute 18 month old) one of the cats comes and sits beside me as I read and my niece naps. So I wonder if the cat doesn't realise I'm a dog person):

I realised that I don't often use the varied stitches that are available on my machine - its mostly a hard working piecing and quilting machine. So I thought on the binding I'd try one of the many shapes. I chose hearts (because my sister-in-law will like those) but once on I thought they looked a little like cats paws or even cats ears. I also used a thin flange (?) or piping around the binding - mostly because I was concerned I would run out of the black, but also because it does tie in with the light brown that I'd used in the mats. 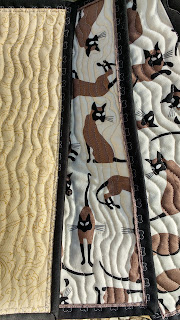 The backing is just a light beige - could be a change from the cats.
So now I'm looking forward to passing then on as a gift on Wednesday. One squirrel less to chase.