Once Upon A Time

It feels like something of a relief to say I'm almost finished this quilt. Almost at least means its likely to happen in the next couple of days, only binding to attach, the bulk of the quilting is done. While this has been a great project in many ways, I don't think its something I'm going to repeat in a hurry. There are a few photos of the quilt here, but I feel like celebrating! 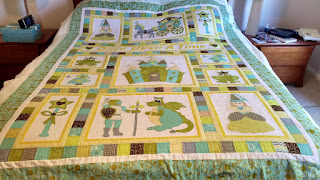 The pattern is one from Kids Quilts (www.kidsquilts.com) a New Zealand based company that had a display at our Craft and Quilt show in 2015. At that time, three of us went in to buy the pattern together, then met regularly to encourage each other in our progress. Two of us hadn't done much at all in the way of applique, so that was a challenge for us. The sample was in pinks, but I had lemon, turquoise and greys in mind, so went with my own choice of colour palette.

I put some of the blocks together in a timely way, keeping up with the others, but then seemed to fall in a bit of a hole (other quilts came along) and didn't get to piece this together or begin the quilting. Initially I thought I might complete it in November (we began in May 2015) when my niece was born, but that didn't happen. 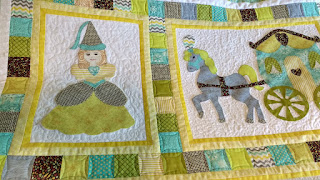 Then I sold my quilting machine, so felt I needed to wait until I bought another to even get to the flimsy stage. I did get it together though and hoped to quilt in April - that also came and went. I did, however, buy a new machine, a Brother that I'm very happy with, well mostly, but more of that in a moment.
The final push to complete the quilt came with the realisation that the 2016 show was coming along, so 12 months and I hadn't finished my quilt! My two friends had done theirs, one residing on a guest bed for grandchildren and others to enjoy, the other sent interstate for a little girl to love and snuggle with.
As the date of the show came closer (May 18) I continued to quilt and realised while I wouldn't quite make it, I was going to be very close. My new machine was proving to be wonderful, except the last little part of the needle threading process prior to using the automatic needle threader and perhaps the space wasn't quite as large as I'd hoped as I wrangled the quilt through the 'neck' of it. 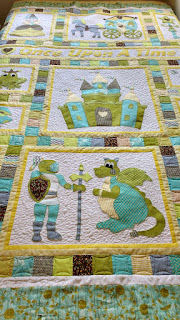 Anyway, I went along to the show with a group of wonderful enthusiastic women, what fun! And I saw a Janome S3, a machine I'd had quite a thorough look at before I purchased my Brother (on which I got a great deal I have to say). And before I knew it, I had sat down, tried some free-motion quilting, oohed and aahed at the deal (included a hard cary case, a mannequin, dressmaking scissors, more bobbins than I know what to do with AND a fit for the purpose sewing table, as well as the Australian dollar price of $1299! What a deal!!)
So I now have another new machine. Am I crazy? Maybe I'll just be able to do even more patchwork and quilting? Maybe I'll sell the mannequin and hard case? Who knows, but I'm almost finished this quilt that had a lot to do with it in some ways, so I'm celebrating! 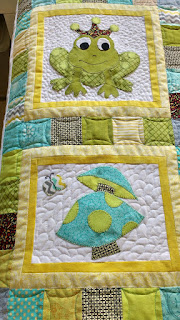 I think the elements of dragon, princesses, frogs and mushrooms are very cute. And I did enjoy the quilting. I think when I first saw it I was lulled along with the 2 and half inch squares, which I always like. The quilting looked pretty OK (it was fun) but I suspect I underestimated the applique process and assembling it all. Like most quilts though, once the hours are put in and the end product is there, you know it will likely last for a few years and so that makes it all worthwhile.
My niece's first birthday is coming up in November, so I'm well and truly ready ahead of time!